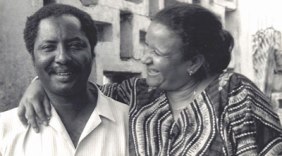 What do you say about a man who has given everything for nothing?

As my brother says, what is the point in writing; and what have we not said before or what difference would this make?

I believe we owe it to him; we can’t just give up as that is not an option. It is true, we have called, written, yet still nothing promising. But there is a time for everything, and there is no backing down now!

Alhamdulillah, it is nine years now and we are still alive; don’t know how; but I for one cannot believe we survived and have the will to live.
The last nine years have gone by like it was yesterday; there is still the days when we find ourselves living a misery we are so dying to solve.

What is evil? Evil is filth, disgust, horrendous and demonic. Who have left us pacing through scenes as if we were living a normal life. Much of it is all based on faith which binds us together in our lonesome journey. When every festivity or celebratory event ends abruptly with a fountain of tears, which make onlookers believing we were mourning for a recently departed soul only to realize we were longing for a very special dad, husband, granddad , brother, uncle and friend; the missing piece of the puzzle. This is what we are reduced to, thanks to some evil beings!

Nine years ago when evil set off on the road to alter, displace and leave a lot of lives in shambles. Without any thought of the aftermath of the events that unfolded on that fateful night, or any concerns over the 3 bullets wasted on a humble and gentle giant who was always prepared to die for his ideals; which makes us ever so proud of him, but unfortunately this is not enough to ease our pain.

When our world collapsed, we were left in agony, losing the will to live. When getting through one night was as harder as the one before or the next; when nothing or anything could be soothing enough to let us be.

Deyda died for his ideals and no matter what, that would always be something. He never backed down and no amount of threat was enough to break him. In a way, he is laughing as he never died a coward, for which he will always be remembered by his colleagues – to be ethical and dedicated to the core, and sacrificed his life for Press Freedom, Democracy and Justice for which he fought hardest to be restored in our society.

He advocated immensely for the oppressed, the voiceless and never gave in to any amount of intimidation with so much tenacity to a noble profession. He was a non-fearing and daring journalist who was indestructible and was not under anyone’s control, and so all was done to destroy him.

Just a week before his assassination, he and some of his colleagues in the Media Fraternity had challenged the Government’s bill, he called “Attempts to muzzle Press Freedom in The Gambia”; and to think that he was shot dead just two days after the said bill was given assent in Parliament is a disgrace.

He liked the idea of living in a Free Press and a Democratic State where the Press, which he thought represented the interest of the masses, their eyes and ears, to ensure they (the people) were heard and all their needs were met, and it was for the media to inform politicians of the people’s demands. For instance, affordable cost of living, where the farmers can enjoy a good harvest and that parents everywhere can afford free or cheap health care, also that their children should be able to enjoy free Education.

He thought he was not asking for much; all he expected was 21st century journalism where Free Expression is to be practised, as should be enjoyed in any Democratic state where Media is seen as part and parcel of any developing state, working hand-in-hand with the state for reforms without a wedge between the two. He thought if he upset a few while manifesting his belief, so be it; he promised to campaign for Free Expression or die trying! That was his dream. In a way, he served his purpose in life.

These are some of the suggestion he put through to the politicians which everyone knew made him more enemies and some even thought he was “an enemy of the very state”, unfortunately the same state that was supposed to guarantee his and every citizen’s safety failed him totally from the onset . No wonder after nine years there is hardly any new development.

It was tragic and shocking, the brutality of this unprovoked and unwarranted killing touched anyone with a HEART and to deny him justice is cruel. His legacy is assured in all he stood for, and his ideals. He may be gone, but will never be forgotten, as his memory is kept alive in the hearts of his loyal friends and colleagues (our brave aunts and uncles, brothers and sisters of the PEN) who along with family members have kept us thriving.

Alhamdulillah for you all, your contribution to our plight and calls for justice is unbelievable. Your solidarity when it comes to our Dear Pa is one of a kind. You guys bring tears of joy to our hearts; each and every one of you is doing his or her utmost best to keep him alive. You have gone to hell and back in his name, encountered enormous loss, suffered a great deal (In The Gambia or in the Diaspora) putting in a lot of efforts for which we can never repay each and every one of you.

If there was anything greater than, “Thank You”, we will afford that to you, as no one has done more in lifting us up, like you have in the last nine years…Thank you so much for your endless loyalty and integrity, your support and selflessness. You are among a few who have helped in making life bearable in terms of our grief. We remain ever so grateful to you all who put pen to paper for Human Rights, Justice and Free Expression in The Gambia.

Finally, we reinforce our appeals as we have done in the last nine horrid years, to the United Nations, Amnesty International, Human Rights Watch, Open Society Justice Initiative, Article 19, Agence France Press, Reporters Without Borders, AU, OAU, ECOWAS, GPU, WAJA, TAEF, TAJ, IFJ, NUJ, OSIWA, International Penn, CNN and Multi-choice, and all organisations that believe in Free Expression, Human Rights and Justice to once again rally with us in demanding Justice for a man whose journalism campaign has cost him his life, leaving a widow and fatherless children who are lost without his guidance!

To Pa,
You are too precious to be forgotten, you will forever live in our hearts and minds. We cannot describe with words the sadness we feel or how much you are loved and missed. May all the good you showed to mankind be everlasting peace for you in Jaana….Ameen!
Happy 22nd Birthday to The Point Newspaper
Thanks to Uncle Pap Saine, staff, editors, management, publishers and friends for keeping Pa’s pride and joy alive, though under extremely strict conditions; you are all commended for ‘keeping the flame on’…thank you.

To Aja Mariam Hydara,
Happy Birthday Ma, the last nine years have proved to be an unfair and horrific experience, but with grace and dignity you have put your grief aside to deal with everyone else’s. We thank you for keeping us together. May Allah grant you long life and good health, to see Justice for our dearest Pa.

FOR THE STRUGGLE
I start by saying that this passage that I am writing is only for the few hundred Gambians that are currently living in the same fate as us.
Deyda Hydara was one of the first people in the country to be murdered in such a dreadful way, at the time. It was something of a grand spectacular, as no one has seen such sinister and callous act executed in our dear country before.

But almost a decade on and now the stories are too familiar now – with reports of people taken from their homes, their families and not a word heard from them again.
At least, we were able to say Goodbye, perform a scared burial, but a lot of fellow countrymen don’t have this basic luxury to “shed the bitterest tear over graves for the words left unsaid and deeds left undone”. For this we thank God.

I believe and have witnessed the Gambian authorities not allowing my family and me to exercise our legal right by the refusal of not handing over the Death Certificates for my father.
Nothing about the murder of Deyda Hydara was predictable.
Nothing about the way the authorities handled matters after the killing was open.
· No Death Certificate issued to the family, even when we took it to the top!
· Instead, an image tarnishing interim report was published.
And no government body has ever explained these at our hour of need.
It is quite possible that this same emotion is felt by other Gambian families that have experienced what we’ve gone through.

What I ask of the Government is to be steadfast, and to be able to show us Gambians that they are just not going to sit around and watch the perpetrators of such crimes come to our country and conduct and execute such ruthless acts on innocent Gambians, and cause enormous amount of grief and fear onto Gambians.

TRIBUTE TO A DEAR DAD

It’s December 16th again; it was the happiest day, we used to sing, dance and make sure we make it memorable for our Dear Mum.

Unfortunately, for us (the Hydara family), it has changed to be the worst day of our lives. When it is December 16th we have memories of that dreadful day we no longer wish Ma Happy Birthday, because it is the saddest day of her life now. I keep wondering how much hatred could someone have had for Pa to end his life. It pains a lot, because there is no doubt those who knew him very well know that he was innocent, fearless, harmless and very peaceful.

I don’t know who his killers are, but they know themselves, and I am sure they don’t have any parental love; cruel as they are to have snatched our dearest Pa.
Pa, we thank you for choosing Ma; she’s been there for all of us all the time, no matter what. Pa, we thank you for being you. May Allah (SWT) grant you the highest place in heaven! We love you and miss you.