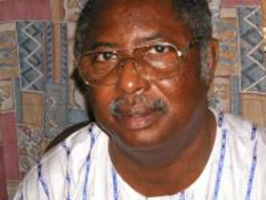 Who killed Deyda? This famous nine-year-old unanswered question that the media fraternity of The Gambia has indefatigably been asking since 2004 to date breeds the question: “Any answer to our nine-year-old question?”

On December 16, 2004, Deyda Hydara was shot by gunmen who are yet to be brought to justice and the state did not yet carryout any thorough investigation to unveil the truth about this cowardly killing. His killers have smeared the image of our country and have also deprived Gambians of a man who could have served his country longer for the attainment of a better democratic system.
Hydara has a journalistic knack in pushing the agenda for accountability and transparency in the country.

No government will be applauded for ignoring or refusing to dig into the death of a citizen who upheld his fellow citizens’ right to know by living for the promotion of Freedom of Expression and Freedom of the Press which he also died for.

Hydara as a martyr
He went through sleepless nights to keep The Point newspaper on the newsstand with his colleagues for thirteen years. He is not just a hero whose portray should be hanged in our media offices and houses but make sure he death is not in vain.
Any of us who know Hydara must be inspired by his passion for journalism and the power of his philosophy of the job earned him the love of many young media practitioners.

He was a man who had no time to make enemies but stood firm against draconian approaches of the state in handling matters affecting journalists and journalism in The Gambia, especially the private media. He was not a cheap ‘yes man’ of the system. As a believer of a “No” that protects citizens’ right to free expression and the rights of journalists to freedom of the press in order to defend the public’s right to know, he challenged the Media Commission Bill and wove to relentlessly continue to be firmer against any effort to strangle rights. He lived his words and died as martyr.
He tried to keep the government on its toes in columns of The Point, ‘Good Morning Mr. President,’ ‘Horomsi’ (Wolof for the salty thing) and ‘The Bite.’

His courage was exceptional and his conscience clear, for he has been a big sort for his country. Nine years is too much for the media fraternity, friends and the family of Deyda to cry in sotto voce, hence the crying out and the long loud call for an answer. Who killed Deyda?

Need for investigation
When I watched the memorial service of Nelson Mandela on TV being graced by leaders across the globe, the attendance of our head of states induced me to ask: “What is the raison d’être of attending the memorial of a man who fought took and nail for his country’s salvation from apartheid, while our president leave the Gambia with unsolved matters like Deyda Hydara’s death?”

If the Gambia Police Force can team up with Interpol to investigate the killing of a Briton in the country and brought the perpetrator to justice why not the assassins of Deyda.

Anyone has the right to call on the state to investigate thoroughly and bring the criminals to justice. Steering the affairs of a country is not a trivial responsibility. The rights of all citizens and residents should be protected much more the right to life which is enshrined in all laws, except the law of the jungle. Human life should be respected.

I agree that cattle are somehow more important than human being in The Gambia, because security officers have investigated and apprehended cattle rustlers in several part of the country including the borders, whiles the killers of journalist Deyda are gone scot free.

The state should investigate and break its silence on the assassination of Hydara. Media practitioners both at home and abroad, colleagues, friends and family want to know who killed him.

Anyone who has evidence including the government should come forward and clear the doubt of the world so that justice can be done in the soonest possible time. Gambia should not remain a country where people can be killed and the killers get away with it.
All those who know anything about the killing of Deyda should come as they will be pioneers in shedding light on an unsolved matter that the whole world is interested to know. Anyone who voluntarily comes forward to give reliable information with evidence of Deyda’s assassination will be championing a cause for justice.

Even the perpetrators should be able to come out as it is expected that they can have more evidence than anyone due to their role in the whole ploy.
Cowardice should end now for the truth must triumph.

The justice Gambians deserve
we deserve justice, because as Gambians we have created a good image for the country which earned her the name Smiling Coast.

Gambians have been known for their peace loving nature, which gross human rights violations can masticate and metamorphose many of our brothers and sisters into criminals and retaliators. In a society where killers do not face punishment for theirs crime to be either reformed or deterred from the action, the serial killers continue to be killers and the victimized population can be avengers.

Impunity breeds a jungle-like society. When human beings give ways to heartless tendencies, they become worst than beasts.